The previous PV-related DSTAR projects (P8-8, P13-9) were studies that broadly and generically addressed potential issues with distributed generation on distribution feeders. In this project we developed a methodology for determining the actual impacts of PV integration on distribution feeders under study. In particular, this project explored the impacts of PV on steady-state primary voltage by evaluating how much PV could be hosted on a feeder before steady-state voltage across the feeder exceeds limits specified in applicable standard.

Some DSTAR members have access to a PV screening tool, i.e., a tool that assists in verifying interconnection of a new individual PV installation. Such a tool uses a simplified one-line model of the feeder under consideration. In contrast, the methodology being explored in this project considers full feeder models and determines conditions that occur when more PV is added throughout the feeders.

Ten circuits contributed by DSTAR members were selected to represent a few typical topologies and load types commonly found on U.S. distribution systems. Extensive simulations were run on these circuits using the distribution systems analysis tool CymDist™ in order to assess the voltage profile along the feeder. We then studied how the profile changes from a baseline scenario with no PV installed on the feeder to specially constructed scenarios of increasing PV penetration. The scenarios of PV deployment included both the cases of isolated utility-scale PV plants and distributed residential PV installations at various locations.

In addition to answering questions of “how much PV is too much”, the proposed methodology helps in understanding what parts of a distribution feeder are most prone to voltage-related problems as more PV generation is added. In that way, the methodology can be used to study location-based technical challenges of PV integration. This type of study is becoming more common with the introduction of Distribution Resource Planning processes that are now mandatory in several states across U.S.

The detailed simulation methodology also included visualizations (heat maps) of the problematic portions of a feeder. So, in addition to the computed maximum PV capacity that can be hosted on the feeder, the output plots indicate sections of the feeder that can exhibit excursions beyond voltage limits.

Since the workflow in the detailed methodology requires a significant level of involvement from a user, the project also developed a simplified tool which requires just a few input parameters in addition to the feeder model. Since it applies a simplified algorithm, it executes faster to estimate the feeder hosting capacity with reasonable accuracy. However, since its search space is smaller, it could potentially produce more optimistic result than the detailed approach. 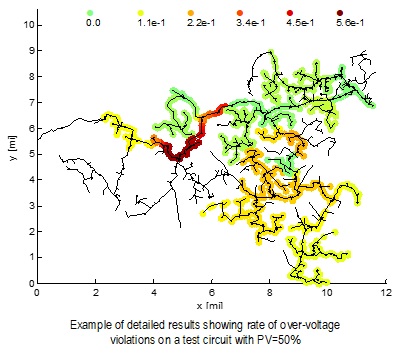 In addition to the estimate of the PV hosting capacity, the detailed methodology also provides visualizations of critical locations with respect to the allowed voltage bounds. For most circuits, the location with the largest number of voltage violations is near the end of feeder, near a capacitor or near a voltage regulator. Presented as heat maps on top of the feeder topology these visualizations show the likelihood of voltage violations. Together with the visualizations of average voltage, these maps give insight into the statistical properties of voltage across the feeder. Thus, they can point to the feeder locations where voltage regulation mechanisms need to be modified as more PV is added.

For example, the figure to the right shows the rate (or likelihood) of overvoltage excursions outside the ANSI C84.1 band for 50% PV penetration on one of the test circuits. The most over-voltage incidents occur on sections that are shaded red, which indicate locations where PV is more likely to create technical issues. 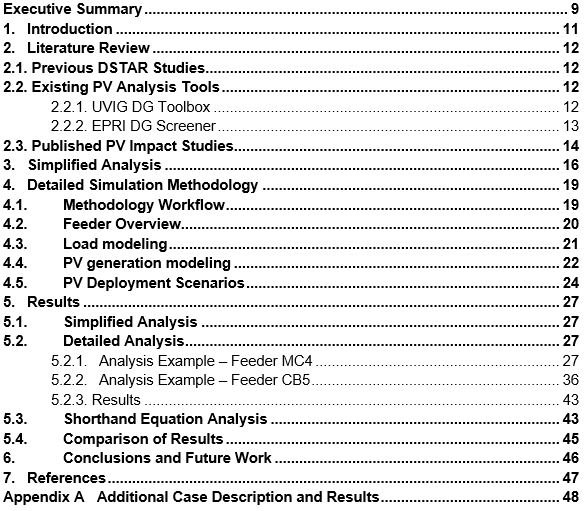 This study was conducted in: P15-6