There is a need for the industry to track the performance of separable connector systems (elbows, caps, and bushings) with regard to flashovers during light-load and no-load conditions. A web-based database has been established by DSTAR, and is open for industry-wide input. Results will also be made available to the industry.

There have been widespread reports in the industry of flashovers during operation of elbows and insulated bushing caps. These failures have occurred primarily during routine switching when very small load currents, or just cable charging current, are interrupted. The numerous flashovers during insulated cap removal have been particularly perplexing because virtually no current is interrupted.

In general, these flashovers are much more frequent at the higher distribution voltages; 25 and 35 kV. Flashovers have been reported involving products from all of the major manufacturers.

These elbow and insulated cap flashovers are of particular concern due to the proximity of operating personnel to the faults. In addition, customer interruptions, material replacement costs, and lost crew time are additional negative consequences of these flashovers.

IEEE Standard 386 calls for elbows and bushings to be tested for their ability to safely interrupt load currents up to their rating. Present standards, however, do not address the performance under low-load or no-load conditions.

The Distribution Systems Testing, Application, and Research (DSTAR) group began an extensive series of investigations and tests in 1995 to determine the causes for these flashovers. In addition, the Insulated Conductors Committee of the IEEE Power Engineering Society also has been considering standards revisions.

Spurred by the concerns of the utility industry, the major manufacturers of these components have also performed their own investigations.

Removal of an elbow or cap expands the sealed air volume inside the elbow, creating a partial vacuum. This is illustrated in Figure 1. According to Paschen’s Law, partial vacuum reduces the dielectric strength of the air. The consensus within the industry is that this partial vacuum is a significant cause for the flashovers. In response, major manufacturers have introduced re-designed components which seek to mitigate the partial vacuum condition.

During the DSTAR investigations, flashovers occurred for which the partial vacuum theory may not provide a satisfactory explanation. Figure 2 shows video frames from DSTAR tests. The first frame shows the elbow cuff clear of the bushing. By this time, partial vacuum along the elbow/bushing interface should have been equalized. In the next frame, a flashover occurs.

Click here to see a short video of the above test. 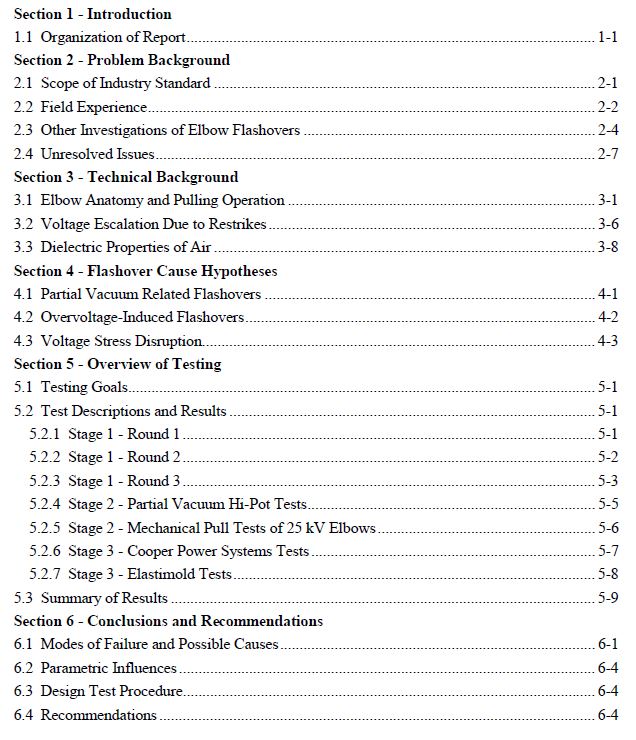